Dance is believed to be important in the courtship of a variety of species, including humans, but nothing is known about what dance reveals about the underlying phenotypicor genotypicquality of the dancer1, 2, 3, 4, 5, 6. One measure of quality in evolutionary studies is the degree of bodily symmetry (fluctuating asymmetry, FA), because it measures developmental stability7, 8. Does dance quality reveal FA to the observer and is the effect stronger for male dancers than female? To answer these questions, we chose a population that has been measured twice for FA since 1996 (ref. 9) in a society (Jamaican) in which dancing is important in the lives of both sexes. Motion-capture cameras created controlled stimuli (in the form of videos) that isolated dance movements from all other aspects of visual appearance (including FA), and the same population evaluated these videos for dancing ability. Here we report that there are strong positive associations between symmetry and dancing ability, and these associations were stronger in men than in women. In addition, women rate dances by symmetrical men relatively more positively than do men, and more-symmetrical men value symmetry in women dancers more than do less-symmetrical men. In summary, dance in Jamaica seems to show evidence of sexual selection and to reveal important information about the dancer.

Darwin was the first to suggest that dance is a sexually selected courtship signal1. If so, it should reveal genetic or phenotypic quality of the dancer. One such indicator of quality is degree of fluctuating asymmetry (FA), because it is inversely correlated with degree of developmental stability, which is an organism's ability to reach an adaptive end point despite ontogenetic perturbations7, 8, 10, 11. Across diverse taxa, increased FA is associated with increased morbidity, mortality, poor fecundity and other variables linked to natural and sexual selection7, 8. Most germane to the hypothesis that dance reveals underlying developmental stability is evidence that reduced fluctuating asymmetry is associated with locomotory traits or their functional effectiveness in several species, including humans12, 13, 14, 15, 16, 17, 18, 19. Likewise, bodily FA is inversely associated with attractiveness based on a person's odour20, voice21 and facial appearance22. (Note that associations between FA and measures of sexual selection may sometimes be overestimated owing to publication bias and problems associated with small sample size23.)

There are no studies in humans (or any other species) linking variation in dance quality with genetic and/or phenotypic quality. One difficulty is that dance evaluations are potentially confounded by the appearance of the dancerfactors such as clothing, culture, physical attractiveness and FA itself. To control for these potential confounds, we used motion-capture technology commonly used in medical and sport science to extract accurately complex movement24, including dance25 (see Supplementary Video 1 for how stimuli were constructed). Thus we were able to separate the phenotype of dance from the phenotype of the dancer. Motion-capturing of 183 human dancers was conducted in 2004 in Southfield, Jamaica. Each individual danced alone to the same song (popular at the time in Jamaican youth culture) in the same place in front of the same film crew for one minute.

Forty dance animations were chosen on the basis of the level of fluctuating asymmetry of the dancer, using two measures of FA over time (1996 and 2002). Specifically, individuals in the top third on both FA measures were categorized 'asymmetrical' (n = 20), while individuals in the bottom third of both samples were categorized 'symmetrical' (n = 20). This experimental strategy helped to control for longitudinal changes in FA due to the accumulation of developmental errors, compensatory growth26 or measurement error. Traits used to calculate composite relative FA were the elbow, wrist, knee, ankle, foot, third digit, fourth digit, fifth digit and ears. These traits were measured because they reveal true FA rather than directional biases, and have proven useful in numerous past studies of FA in humans9, 20, 21, 22. Dance animations of symmetrical (Supplementary Video 2) and asymmetrical (Supplementary Video 3) individuals were presented randomly to a sample of 155 Jamaican peers (themselves characterized for FA) for evaluation on a dance rating scale. No one interviewed afterwards (n = 20) was able to recognize any individual from his or her motion-capture video. Indeed, correct sex recognition in the current sample was only 62%

0.08) being somewhat better at detecting the sex of the dancer than male evaluators (60%

0.13) (MannWhitney test, Z = 2.25, P < 0.03). Cronbach's alpha indicated that inter-rater agreement for the dance rating scale was 0.91 for the entire sample and for both subsamples of correct versus incorrect sex detections. Finally, there were no effects of correct sex identifications on the dance evaluations in the current model (see the Supplementary Background and Analyses). We conclude that evaluators based their judgments on motion-captured movements and not on recognition of the identity or sex of the dancer.

In species where fathers invest less than do mothers in their offspring, females are expected to be more selective in mate choice, and males to invest more in courtship display27. Thus, we predicted that degree of symmetry would more strongly correlate with male dance ability, and females would be better discriminators. Assuming lower quality individuals (higher FA) are less attractive to the opposite sex, there may be selection for such individuals to shift their preferences downward towards individuals more likely to accept them as mates28. Therefore, we tested whether greater FA of evaluators was associated with weaker preferences for symmetrical dancers. 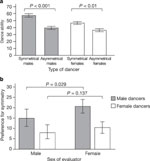 a, Mean dance ability of males (filled bars throughout) and females (open bars throughout) by level of bodily symmetry. Error bars represent 95% confidence intervals. P values for within-sex are shown. b, Mean strength of symmetry preference (that is, evaluations of asymmetrical dancers subtracted from evaluations of symmetrical dancers) by sex of dancer and sex of evaluator. Error bars represent 95% confidence intervals. P value at top of panel indicates significantly greater female than male evaluator preference for symmetrical male dancers.

Does fluctuating asymmetry of the evaluator shift preferences away from symmetrical individuals? A multiple regression analysis revealed the predicted association in men (Fig. 2). That is, FA in male evaluators was negatively associated with relative preference for dances performed by symmetrical females. Specifically, changes in male composite relative FA accounted for 11% of the differences in the relative preference for the dances of symmetrical females when age and BMI were included as covariates (partial R2 = 0.11, P = 0.02). There was no significant association between female evaluator FA and preferences for symmetrical males' dances, R2 = 0.02, P = 0.32.

We do not know what mediates the associations reportedperhaps asymmetry itself or a covarying characteristic such as neuromuscular coordination or health, including freedom from parasites2, 29. Attractive dances may be more difficult to perform, more rhythmic, more energetic, more energy efficient or any combination of these factors. As motion-capture technology stores each dance in a mathematical form, we hope to discover more precisely which patterns of dance movement are associated with both quality of dance and FA of the dancer. Does dance ability correlate with reproductive success? We plan to address this question with long-term data from the same population.

Morphometric measurements were collected for each dancer (wrists, ankles, elbows, third digit, fourth digit, fifth digit, ears, feet, knees) with vernier calipers to 0.01 mm accuracy (see the methodology in ref. 9) in 1996 and 2002 in Southfield, Jamaica (refer to the Supplementary Background and Analyses for details). To establish repeatability levels and reduce measurement error, each trait was measured twice and averaged9. Bilateral trait measurements were found to be reliable indicators of between-subject differences (as opposed to measurement error), and reflect true FA rather than biologically significant directional asymmetry or antisymmetry (that is, the signed trait asymmetries did not show significant platykurtosis, an indicator of antisymmetry rather than true FA9). Composite relative FA was calculated by subtracting the average length of the right side of the trait from the left (L minus R) and correcting for trait size30, and then summing the absolute values across all traits.

A large sample (n = 183) were filmed with motion-capture cameras under constant conditions: one minute, same music, and danced within a 4-m2 space. An optical motion-capture system from Vicon was chosen owing to the freedom provided to the subject when using lightweight markers. Optical motion-capture systems have been extensively applied in biomechanics for gait analysis and motion research. The system used eight cameras (120-frames-per-second capture rate) in order to capture large amounts of dance movement while removing potential visual confounds (including body size, attractiveness, clothing and identity). These cameras (Supplementary Fig. 1) tracked movements using 41 infrared reflectors (Supplementary Fig. 2). Subjects wore relatively tight clothing to facilitate accurate information from the markers. Reflector trajectories were used to robustly reconstruct joint angles of the three-dimensional (3D) skeletal animation, and transformed this information into a virtual 3D animation. To post-process captured raw data, Vicon IQ 1.5 software was used. The animations were displayed with visualization software developed at the University of Washington. This software used accepted techniques for generating accurate animations from marker positions.

1.79). The criterion for selection was that a symmetrical individual must have been in the bottom third percentile of fluctuating asymmetry in both 1996 and the 2002 re-measure (the reverse was used for the asymmetrical category). There were no statistically significant sex differences in mean or variances in FA between the sexes within a given category (Supplementary Background and Analyses). Despite the subtle differences in FA between asymmetrical and symmetrical dancers, the means were statistically different, all t values were >11.00, all P values were <0.001. The 40 dance animations with audio were randomly presented on a 2-m white background sequentially using an InFocus DLP Projector to a sample of 155 young adults (mean age = 18.12

1.75; 87 males, 68 females), also part of the Jamaican Symmetry Project8, for evaluation on a 90-mm scale with the left side labelled "Bad Dancer" and the right side labelled "Good Dancer". Each subject was asked to place a vertical mark on this scale. Marks were measured to the nearest millimetre by a research assistant blind with respect to condition. Each subject was also asked to identify the sex of the dancer in a forced-choice question. To restrict the study to evaluations of others, we removed 31 self-evaluations (15 male and 16 female) where individuals rated their own dances. The virtual 3D dance animations were presented in an approximate front-facing angle by an experimenter blind with respect to condition and hypotheses. Presentation order was not related to dance evaluations (Pearson r = 0.04, P = 0.82) or dancer FA (point biserial r = -0.14, P = 0.40).

2 (Symmetry of Dancer) between-subjects ANCOVA (analysis of covariance), with dance ability as the dependent variable, tested the primary hypothesis that symmetrical individuals are better dancers (data analysed by SPSS 12.0 from SPSS Inc.). BMI and age were included as covariates. Dance ability variances were not significantly different, although a marginal difference was observed whereby males show greater variability in dance ability (180.19) than do females (113.03) (Levene test F = 3.29, P = 0.08). To investigate individual differences among evaluators in the strength of symmetry preference, t-tests were used. Results remain significant when using a nonparametric MannWhitney test for heterogeneous variances. Multiple regression analysed whether or not fluctuating asymmetry of evaluators was negatively associated with relative preference for symmetrical dancers. Age and BMI were entered as covariates to minimize the influence of these potential confounds. Neither age nor BMI of dancers nor evaluators were associated with dance ability or the evaluators' preferences. Finally, the effect of bodily symmetry on dance ability is independent of facial attractiveness and self-esteem of the dancer (Supplementary Background and Analyses).

We thank the Jamaican Ministry of Education and Culture for permission to conduct research. We are grateful for assistance from teachers, principals, parents, students, M. Cuff, B. Dunham, N. Sutherland and D. Zaatari. Financial support was provided by Rutgers University, the University of Washington Animation Labs, the Ann and Gordon Getty Foundation, the Rutgers Center for Human Evolutionary Studies, the Biosocial Research Foundation, and NSF grants awarded to L.C., Z.P. and R.T. W.M.B. was supported by an NSERC (Canada) postdoctoral fellowship.

The authors declared no competing interests.

Correspondence to: William M. Brown1 Correspondence and requests for materials should be addressed to W.M.B. (Email: wmbrown@rci.rutgers.edu).